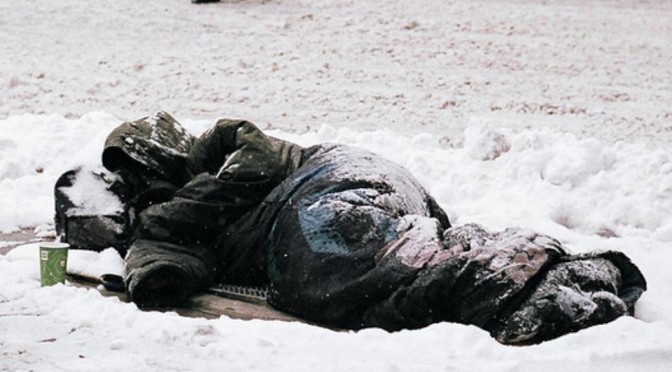 Necessity is a defense long-recognized by the common law as a type of justification defense. It is a defense which "is often expressed in terms of choice of evils: when the pressure of circumstances presents one with a choice of evils, the law prefers that he avoid the greater evil by bringing about the lesser evil."

For example, a Boston court recently ruled that a man can't be punished 'simply for being homeless' after he broke into a privately owned building to protect himself from the weather. Conduct which otherwise would be a crime is justified and not criminal if the conduct is, under the pressure of circumstances, the lesser of two evils.

The defense is usually distilled into three essential elements: "(1) the act charged must have been done to prevent a significant [harm]; (2) there must have been no adequate alternative; (3) the harm caused must not have been disproportionate to the harm avoided." Cleveland v. Municipality of Anchorage, 631 P.2d 1073, 1078 (Alaska 1981).

The first two elements are factual determinations which may be satisfied by the defendant's reasonable belief.Townsend v. United States, 95 F.2d 352, 358 (D.C.Cir. 1938); United States v. Ashton, 24 F.Cas. 873, 874. The third factor is a value determination. The defendant's belief is not necessarily relevant and certainly not controlling. The accepted norms of society determine the relative harmfulness of the two alternatives and the defense is allowed if the "harm done by the defendant in choosing the one alternative was less than the harm which would have been done if he had chosen the other."

Traditionally, the harm to be avoided had to be caused by the "physical forces of nature (storms, privations) rather than from other human beings."  This requirement has been relaxed and the defense of necessity may encompass harm caused by human beings. See, e.g., People v. Lovercamp, 43 Cal.App.3d 823, 118 Cal.Rptr. 110 (1974). However, if the necessity defense is expanded to include human threats, it has been suggested that the expansion is limited to those human threats which are illegal.

In Missouri, the defense of necessity has been codified as an affirmative defense. § 563.026 RSMo. Whenever evidence relating to the necessity defense is offered, the court must rule "as a matter of law whether the claimed facts and circumstances would, if established, constitute a justification." § 563.026.2 RSMo. Conduct which would otherwise be a crime is justifiable "when it is necessary as an emergency measure to avoid an imminent public or private injury" and the injury "is of such gravity that, according to ordinary standards of intelligence and morality, the desirability of avoiding the injury outweighs the desirability of avoiding the injury sought to be prevented by the statute defining the crime charged." § 563.026.1 RSMo. Thus, the criminal conduct pursued by a defendant must be pursued to avoid an "imminent public or private injury." Without a threatened injury, there is no justification for defendant's otherwise criminal conduct.

Under any definition of the necessity defense one principle remains constant: if there was a reasonable legal alternative to violating the law `a chance both to refuse to do the criminal act and also to avoid the threatened harm,' the defense will fail …" United States v. Bailey, 444 U.S. 394, 100 S.Ct. 624, 635, 62 L.Ed.2d 575 (1980)—a prison escape case.